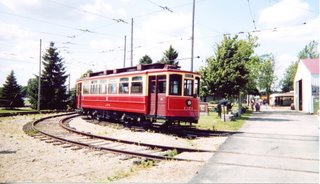 This seen was photographed at the Illinois Railway Museum located in Union Illinois.
This restored electric streetcar was built in 1904 and worked for the Chicago Surface Lines. During the early 1940's, the car was placed into Maintenance Service, and was used as a salt spreader. It was used in later years as a storage shed. The Illinois Railway Museum has doon a fine job restoring this car to it's original CSL appearance. It can be ridden at the museum.
Posted by Eddie at Monday, March 27, 2006