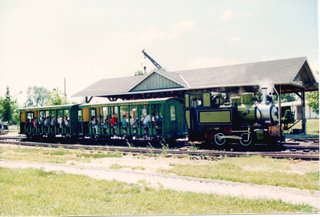 A recently acquired four wheel industrial steam locomotive from Czechloslovakia, is seen here working at the Hesston Steam Museum in Indianna. The cars behind the locomotive were on temporary lease from the closed Brookfield Zoo Railroad near Chicago Illinois. In 2002, the former zoo cars and the three brookfild zoo locomotives were "Donated" to the museum, and are undergoing restoration in the museums -shops. Notice "Brookfield, Salt creek, and Western"markings on open passenger coaches. This locomotive was recently acquired to replace in service, the museums badly fire damaged locomotives from the Memorial day 1985 enginehouse fire, wich destroyed several wooden cars.
The engine was using its "high pitched" and very peanut like "European Whistle" on this day.
Shortly afterwards, an american whistle was soon fitted to the locomotive. The American whistle is mostly used these days, but the Engineer has been known to occasionally give a Shrill european "Tweet" on occasion.
Posted by Eddie at Tuesday, March 21, 2006