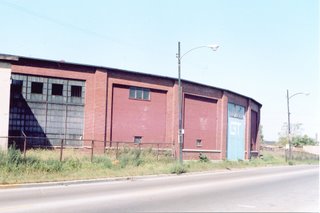 This is the old 1914 built Locomotive roundhouse that used to service the Grand Trunk Western railroads locomotives. The roundhouse was torn down around 1987. One of the "Bricked Up" windows came about from a 1979 incident when a locomotive actually crashed through a wall at slow speed. A strip mall now occupies this site.
The electric light poles seen here, originally are from the Kedzie Avenue CTA trolleybus line.
From 1955 to 1969 , they supported twin overhead trolleybus wires on each side of Kedzie Avenue.
Posted by Eddie at Wednesday, March 22, 2006

A very nice photo Eddie. I also hung out there as a kid. I'm also a GTW railfan. Do you have any other photos of roundhouse or the turntable

Eddie do you a picture of the engine crashed through the wall? nice picture. thanx Willie.

Hi Willie.
No, I didn't get a picture of the Engine through the wall mishap. I think that it happened around 1978 or 79, and I remember seeing it in a local newspaper. I have a small handfull of old, poor quality black and white photo's of the GTW Elsdon Yard, from My photo lab class at Curie High School circa
1979-80 somewhere. Otherwise, My other GTW Elsdon photos are from the early to mid 1980's.

This brings back many memories from visiting my family on the south side. This was my brothers favorite place. Mine was the Crane building up the street. We were too young to go explore it though. Excellent photo. Its nice to see Kedzie without all the traffic.

I remember walking by this roundhouse as a kid in the early 70's. I was able to look in the windows. It was super cool and somewhat surreal to a ten year old kid.

I also remember the trolley bus wires on Kedzie. Life was simpler back in those days.