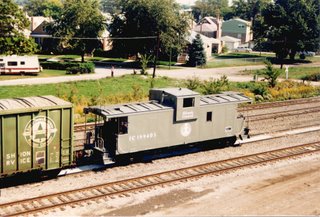 This view was taken from the Pulaski Road bridge near the Ford City Shopping Center, on Chicago's southwest side in june of 1987.
The freight train is seen heading into the Belt Railway of Chicago's "Clearing Yard". The Illinois Central railroad "Merged" with the Gulf Mobile and Ohio" railroad on August 10th 1972, and became the Illinois Central Gulf railroad. It was a bad move, because several years of bankruptcy and misc financial difficulties followed. During the mid 1980's, the Illinois Central had Reorganized it's management and operations, and soon "sold off" several ex GM&O lines to many regional and short line railroad companies. The caboose here shows off the "New" Ilinois Central image and logo. Replacing an Orange color scheme that dated from the year 1967.
Posted by Eddie at Tuesday, March 21, 2006

This photo looks like it's a model train layout!!!!!

No this is no layout I hopped many a train here. used to bust the piggybacks open when they stopped to switch. ah good times